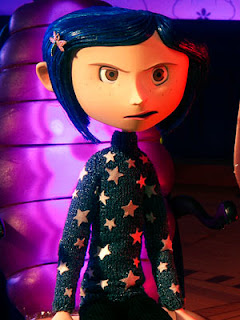 3D Film is the future. That seems to the message coming from every piece of movie press and every film magazine. Now this opinion facinates me as someone who wants to work in the motion picture industry, as it could either be the biggest technical revolution since colour, or it could be all hype and end up as the visual version of the Minidisc format.

Last weekend I decided to pay the extra to see the animated film Coraline (above) in 3D. The first thing that is different about the whole experience, is that it is between £3 and £4 more to see a film in the new format! The next notable change, is when you are handed your brand new 3D glasses in a sealed bag. Gone are the days of cardboard frames with one red lense and one green lense, these are sturdy, black plastic frames that look a little like extra wide Rayban Wayfarers.

The film itself never really fully flexed its third dimensional muscles, with the only really amazing moments when birds or flying objects appeared to jump off the screen. The reason I know that there is more to come, is that it was shown by the trailer before the film, which was for the Jonas Brother's live movie. One particular wow moment came when ripped up paper appears to be thrown at the camera and float gradually towards the viewer.

Many of the summer blockbusters are not going to be available in 3D, such as Terminator: Salvation and Transformers, which is a real shame as this technology utilised by an action film could create staggering results. There are many reasons for this, cost and the lack of knowledge about what people think of 3D cinema going are two of them. But, in my mind, the studios and directors have two other reasons for holding on, James Cameron and Avatar. James Cameron astounded audiences with the two first Terminator films and then walked away with eleven Academy Awards for Titanic. Since then, he took time out, but while he took hiatus, he found time to invent and hone the principle of modern 3D cinema. Now he is back, and he is due to unleash sci-fi action film Avatar into the world, and with all of his productions, epic things are expected. As the father of the new technology, it seems that everyone in Hollywood is waiting to see what Cameron's new film looks like before commiting to projects themselves.

But two things are for sure. If Avatar hits at the Box Office, expect nearly every film to be released from the back of 2010 onwards to be in 3D. And the second is, that despite the lack of usage in Coraline, 3D cinema is the future for cinema goers.
Posted by Michael Beddoes at 07:48 No comments:

Back on writing projects

After a break away from writing while applying for more bursaries and trying to find jobs, this week I have dusted off some old ideas.

One is an update of a much loved British 1960s television show. In the past, this has be risky territory for the movie business, with The Avengers, The Saint and Thunderbirds reimaginating all taking a critical beating and floundering at the box office. But something about the one I am working on really makes me think that it could work for a modern audience.

Currently it sits at about 20 pages into the process, and so far feedback received on the concept behind it as been great.

Obviously, at this early stage, with no rights secured I need to be protective about the source material.

After an initial draft is complete I will be creating a treatment and some supporting documents and making an approach for the rights to use the characters and other names used throughout the show.
Posted by Michael Beddoes at 06:11 No comments:

So, the application which has been whizzing around my mind for nearly a year now has finally gone! The National Film and Television School (NFTS) contacted me today to acknowledge the application, and now, the waiting begins.

As I already have a place secured at Royal Holloway, University of London, the time has come to start giving serious consideration to how it is going to be funded. After much research, it seems that there is limited support for anyone who wants to study a media or humanities based masters degree.

A mixture of savings and selling my car will ensure that I can pay my fees in full at the beginning of the academic year (which brings a £300 saving).

That just leaves the small matter of living and eating! The last few days have been spent researching and applying for part time work that I could fit around the degree. So far, HMV, WH Smith and Blockbuster have been applied to (well I did say I wanted to work with film!). As well as this, various feelance catering and event stewarding posts have been applied for. Hopefully this will yield some results.

Of course, there is always the long shot of a funding application to the Arts and Humanities Research Council, which will award one person on my course the cost of their fees and a further £10,000 towards their living costs. Well, I can but hope!
Posted by Michael Beddoes at 09:58 No comments: