On Friday I was sent a letter in an enevelope marked with the stamp of the National Film and Television School. I instantly thought it was a letter informing me that my application had been unsuccessful.

To my surprise, the letter was offering me an interview for a place on the Producing Masters.

The demand is so great for the courses run at NFTS, that this first interview is conducted with a panel of people from the school. After this, 16 successful candidates will be invited to come to the school for a week, to work on a series of challenges. From this week, the final eight will be selected. It all sounds like something from a reality show like The Apprentice, but the process is genuinely exciting.

On the 3rd July 11am, I will enter a room and walk into the unknown. I don't know who the panel is or what I will be asked, but this seems to add to the excitment. I just need to be prepared to answer any questions on television and film with relation to the career and achievements I want.
Posted by Michael Beddoes at 05:51 1 comment:

The Hangover that feels good! 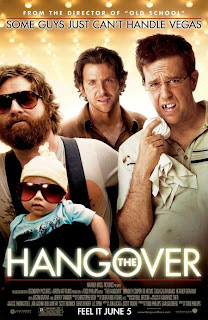 For someone who wants to work in film, my cinema attendance has been at an all time low of late. This Wednesday I set about changing this with a trip to see comedy The Hangover.

Firstly, this would not have been my first choice film as I have not yet seen Star Trek or Terminator: Salvation, but the person I was going with had already seen these.

With Todd Phillips at the helm, who was the director on 2003's Old School, I thought I knew what to expect. Old School was a fairly standard frat boy comedy vehicle for Will Ferrell and Vince Vaughn. It had some funny moments but it was nothing out of the ordinary. With The Hangover being set against the backdrop of a stag weekend, or batchelor party as our trans-Atlantic friends would call it, I was expecting much of the same from Phillips.

And twenty minutes in, true to form, it was panning out that way. But, once into the film, things became interesting. The morning after the night before arrives, with the groom missing, one of the party missing a tooth, a tiger in the bathroom, a baby in the wardrobe and the father of the bride's prize Mercedes missing (replaced by a stolen Vegas police car). The first device that sets this film apart is the fact that we as an audience are kept in the dark about what happened along with the guys, we are not offered clues or flashbacks, so we discover as they do.

Don't get me wrong, this still has gross out moments but its the banter between the group that draws the biggest laughs. Thw writers have got the characterisation of a group of guys on a 'wild' weekend just perfect.

The Hangover is the best comedy that I have seen in a while, and has set the standard for laughs so far this year.
Posted by Michael Beddoes at 04:23 No comments:

The first rule of trying to break into the industry is learning how to accept "the letter". I refer to the letter or e-mail that will arrive numerous times that looks a little like this:

We are sorry that [insert the job they cannot offer you, their reason and usually a line like "the standard of candidates was very high" or "we received a great number of applications"].

This letter will become what feels like a daily occurance. The only way to take it is with a smile, good grace and a response to thank them for considering you. I do this as a rule, and today I have received an e-mail back stating that they will be keeping me on file for future projects.

The general rule of the industry is to be polite to everyone, as you never know who the next "big thing" will be and who will be recruiting for a project in the near future.
Posted by Michael Beddoes at 12:56 No comments: